Our family is growing fast. I admit that it is getting hard to keep up with all the messages and emails coming my way. Normally, I could spend a month or more getting to know the ins and outs of an artist. This year I had to reduce the time to two weeks to keep up with the growing list. I am not complaining by any means. It warms my heart to know so many people want to be part of our family. I’m merely having to find a way to adapt while still providing an in-depth perspective of each artist. Country music artist Tori Martin is my first interview after these changes. The most significant difference between her and the artists before her was her introduction came through a publicist.

Having such an introduction is not groundbreaking. It is how things are done in the music business. I have worked to avoid this as much as possible. As an interviewer, you want to know an artist in their raw form and not filtered through someone else. I never want to see anyone fail. I just want to see the whole person. The good, the bad, and the ugly. We all have these qualities, and knowing all sides helps me connect the artist to you. Taking them off a pedestal and putting them in the chair next to you has always been my goal.

What does Tori Martin have to do with all of this? At first, my worries felt validated. I read all the press releases, watched the YouTube videos, and went over the emails from the publicist with a fine-toothed comb. Tori Martin was squeaky clean, and polished. There was literally a wall of sequins I was trying to find my way through. I finally found an opening during our first interview. It did feel a little rushed, but that first phone call was perfect. Tori was in a parking lot in between meetings and a little rushed herself. She had no other choice but to open up and be direct. So I got to dig deeper than I initially thought was going to be possible. There were a few things I pulled from that conversation.

First thing’s first. The glitz, glam, over-the-top pink, and sequins are 100% Tori. The difference between her and some other artist I have come across is that’s for her. She is not trying to overcompensate or be someone else. Secondly, Tori Martin is confident, but at the same time one of the most humble artists I have ever met. She knows how to reach for the stars while keeping her feet rooted to the ground. Having her feet rooted enables her to resist the one-off trends and lose herself chasing someone else’s shadow.

When I first listen to “What Would Dolly Do?”, Tori’s latest single, I thought she was trying to chase a shadow, and I was wrong. After listening to it more times than I can count, I realized the title, which also serves as the hook, was a little deceiving. The song is  more about Tori Martin reflecting on her own life and career. This single is Tori looking at what her hero has done. Then looking at her own path and finding her own magic to success.

Anything negative about Tori is subjective at best, but I do have one gripe. I hope Tori forgives me for going off-script. It’s a fact that I have interviewed a ton of female artists. By doing so, I have had the opportunity to interact with many of them and their fans. There is a topic that comes up in many of those conversations. It’s hard for me to describe the situation as a guy, but Tori does a fantastic job at it. “Loney Boy” is a song that I know is going to resonate with so many women. It may not be a song that you will jam out to going down the road, but it’s going to pull at your soul.  It should have been one of the first singles released from her album “Lucky.” That’s just my humble opinion. I think more women need to “go there” and discuss uncomfortable topics. Hitting a nerve is sometimes what it takes to get people to feel the way you do. Let’s get to the interview!

Tori Martin is an instant classic in both style and heart. I can say that country music is better with her in it. To celebrate these two facts, we created a classic recipe. Look out for our Heartwarming Chicken and Dumplings recipe she inspired, and enter the giveaway at the end of this page. Here is our interview with country music artist Tori Martin.

I started in the music industry at 16 years young and recorded my first album at Quad Studios. I had stars in my eyes and couldn’t wait to get to Nashville, but I hailed from a small town in Texas named Azle. From 2010 to 2017, I toured the southern region of the U.S. and focused on building my fan base in Texas. When I felt solid in what I had built, I decided it was time to make the move to Nashville and hone in on my sound. It was the best and scariest decision I ever made! This spring will be 4 years since I moved to Nashville.

The color I would be is sage green. Green is my favorite color and feels earthy and peaceful to me. I love to bring my authentic self to the table and carry a “salt of the earth” vibe.

I love everything creative, when writing music and something I already do alongside my music is Interior Design. It’s another ability that brings joy to my life. I love making something shabby into something chic!

If I were to go to your house right now to cook you a meal, what would I find in your fridge?

Writing music is its own unique process, and I feel that it’s different every time. Sometimes the song writes itself, and I don’t think there is a set formula to how that creativity comes about! Just have some pen and paper handy because it can strike at any moment.

I come from a large, close-knit family, and they mean the world to me! I have 10 siblings y’all. Growing up, I was a military brat and moved around a lot, which I feel prepared me for the career path I chose! 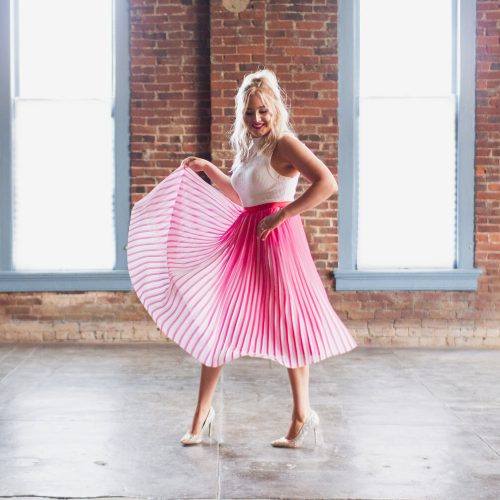 The first thing that comes to mind is catching fresh fish with my Paw-Paw in Arkansas. We would go out to Lake Chicot to catch brim. Paw-Paw would show me how to clean and prepare the fish then how to fry them for everyone to eat! It was so tasty.

Probably a song about Mexican food because I really do love it that much! Growing up in Texas it would be an easy inspiration and probably do well in that market.

2021 looks very exciting! I’m so glad 2020 is over, but it was still a monumental year. “What Would Dolly Do?” was released in 2020 and has been climbing the charts at country radio ever since. We have plans for getting more music out to country radio and continuing to stay connected with my amazing fans safely. I’m hopeful for what this year holds and can’t wait to share what we’ve been planning!

Tell us a few of your favorite things about your hometown.

When I was younger I didn’t love how “small” it was, but now I’d say that may be my favorite thing. I love that no one is a stranger and you can escape from the big city. The slower pace and southern hospitality are what I miss the most.

Tori Martin is classic! We decided to carry that theme straight through her recipe. This Recipe For Heartwarming Chicken and Dumplings is the only one you will ever need!
Let's Cook

You have a fantastic album out titled “Lucky” tell us about it.

Thank you! “Lucky” is an album I’m so very proud of. I recorded “Lucky” at Omni Sound in Nashville, TN and it was produced by Bill Warner. With this album, I feel like it captured my true artistry and voice. It was a dream to write songs with my favorite Nashville songwriters and have such an integral part in the entirety of the project.

If you had all the money in the world, what would you do with it?

Honestly, give most of it away. It’s never been a goal of mine to just “get rich” or die trying. Of course, we all need money to survive, but I know what it’s like to have very little and just barely get by. If anything, it’s an avenue, and I would love to help as many people as I could.

You are living the married life. What advice do you have for couples who want to take the plunge?

Friendship is key in any relationship. Jason and I’s relationship is based on a foundation of friendship, and it is one of the things I cherish the most. Don’t rush into anything that doesn’t feel right, and listen to your gut. More often than not, your gut is always right.

I have a new music video out for my current single, “What Would Dolly Do?”. I filmed it at Selfie Scenes in Nashville, and it was a blast to film! You can imagine all the glitz, glamour, and fun. Give it a watch if you’re a Dolly Parton fan!

That is Tori Martin! Isn’t she a classic? I think it’s a good idea to add all of her music to your favorite playlist. You can find Tori’s music on all streaming platforms, including Spotify, Apple Music, Amazon, and YouTube. While you are listening, give the recipe for Heartwarming Chicken and Dumplings a try and enter that giveaway. Thank you for reading; we have more amazing music and delicious recipes on the way!