Family is a massive part of what Southern Fellow is. I never thought I would form such close connections as I have with many of you. In the past, such relationships would require a face-to-face and a handshake at the very least. As much as I hate social media, it has served as the linchpin that connects us all. Country father and son duo Folks Like Them are trying to connect the present to the past in their own way. They believe that faith, family, love, and enjoying the simple things still have a place in this changing world.

“You do what you need to do when you’re called”, a line from their single “When Your Called” has grabbed me and has never let go. No, I am not a military guy, but I feel they are good words to live by. They are the reason I felt called to get Folks Like Them here on Feed the Band. Whether they want to be or not, Allen and Chris are part of the identity crisis that is taking place in the country music genre.

Country music has almost stretched itself to a breaking point. The powers at be are trying to make the genre be everything to everyone. By doing this, country music is losing its identity. It is also hurting the people who once found refuge in those three chords and the truth.  Country music was the genre for the underdog.  It represented the underpaid, overworked, and those who have lost out on love only to get it back. These folks still need a home. The good news is that they can find one in the music from Folks Like Them.

We had a pretty frank conversation during our Zoom call on this very topic. Chris even asked me at one point if they were even pretty enough to be featured on the website. That was the first time I heard that, and I had to laugh. The truth is, Allen and Chris are not trying to reinvent the wheel, nor are they trying to keep pace with Nashville trends. They are simply trying to be honest with themselves and the world around them through music.

I deal with many new artists, and most of them talk about how they want to be someone else. Many females say they want to be the next Taylor Swift. I usually give a smile and a bit of guidance by simply saying, “Just be you. That’s all anyone wants.” Some just laugh, while others look like a deer in headlights. There is truth to that statement, and Folks Like Them is the proof. Most of these artists have teams of people around them and a bigger budget than Folks Like Them. All of that leads to a handful of TV interviews and a little social media attention. They forget to look, I mean really look at if people are connecting to their music. As far as Folks Like Them goes, that’s where they put all their focus, and it’s paying off with hundreds of thousands of streams on Spotify alone. Simply by writing honest songs and responding to the call from underdogs like me.

It’s a pleasure to have Allen and Chris officially as part of the Southern Fellow family.  That said, I decided to recreate a family favorite. I have never formally written a recipe for our Country Shepard’s Pie. In honor of Folks Like Them, I officially did it. I hope this recipe brings comfort to many. You will find the recipe down below, along with a giveaway. Here is our interview with the country music duo Folks Like Them.

The road to country music came through songs. Although we both play other styles of music, it is the songs of country music, specifically the stories, that have attracted us and kept us interested.

What is it like being a father and son duo?

It is easy for us to be a father and son duo because we have similar personalities, and the shared family history allows us to be open with each other. However, there is enough of a difference in our influences to add variety to the songwriting.

Allen, what takes up too much of your time?

Chris, what was one of the weirdest things you used to do as a teenager?

Not sure, I would say, maybe singing in show choir.   Not my thing.   This might be a great question to ask Dad.

I am pretty sure ya’ll have seen the movie “Tombstone”. What character do you feel represents you individually? Explain your answer.

I think Wyatt Earp represents me the most. I think he’s always trying to do the right thing, even though his methods are questionable sometimes. As far as his skills go, he’s confident but realistic about where he stands. He knew he couldn’t beat Ringo to the draw, but he was willing to try anyway. 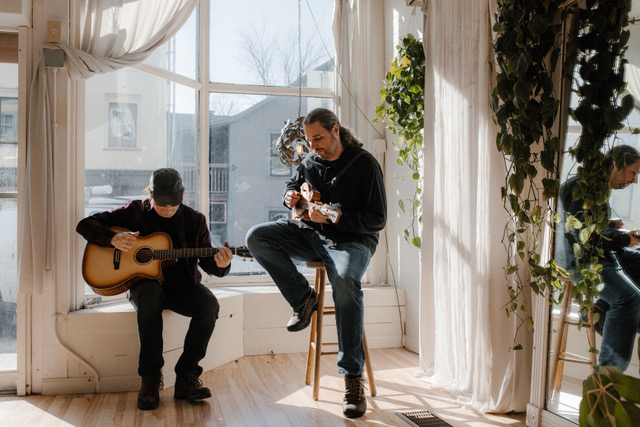 We are constantly developing recipes here at Southern Fellow. When writing music, what recipe do ya’ll use?

We don’t have a set recipe for writing music. We’re just looking for a way to let an idea or story lead us. We are always looking for ways to spice up the music, especially when it seems too predictable. To do that, we may throw in a jazz chord or make it a little more bluesy than might be expected. In a sense, I guess it’s like coming up with a unique recipe; you know when it tastes just right.

What’s unique about where you both grew up?

We both grew up in small-town farming communities that were close enough to large cities to give us a variety of experiences. When we are writing, these experiences allow us to compare and contrast different lifestyles.

Allen, what is your first fond memory of food?

Sunday dinners, my mother cooking fried chicken and mashed potatoes, is my fondest memory. It was food coupled with a family gathering.

Success in songwriting is a tough thing to define.   You start over every time you write a new song.   Success for me is about finding that unique way to deliver a message or a story and then have it connect with the listener.

If ya’ll write a song about food, what would it be?

We have a song on our first CD titled “Sunday In The Kitchen”. We wrote about missing those Sunday dinners in that song, and we referenced some foods we like.

We aren’t much for giving advice, but there are a couple of basic things that ring true in music and life. As far as music is concerned, practice and remain humble. Also, you can learn something from beginning musicians as well as seasoned ones. The other thing is just to be nice to people all the time and learn as much about the business side of music as you can.

One thing I have learned about family is that you have to feed them. Allen and Cris know this all too well. They inspired me to share my family's recipe for Country Shepherd's Pie. As beef people we use ground chuck, but if lamb is more your style use that instead.
Let's Cook

Tell us what you hope the next couple of years has in store.

We just want to keep doing what we’re doing, including writing more songs, recording them, and hopefully gaining a bigger audience. We’ve always felt that the audience part is dependent upon the writing. Writing great songs makes everything possible.

If ya’ll add another member to make a trio, who would the person be, and why do you think they would make a good fit?

I guess we might have to wait until one of Chris’s sons gets old enough to join, then we could keep it in the family. Seriously, we can’t imagine adding anyone at the moment. The chemistry is unique, and it would be difficult to add another person.

Tell us about your album “Our Places”.

The album is, for the most part, based on places that were an influence on us. The songs describe places such as churches, mountains, diners, etc. These places contain characters that are based on our family or stories about characters who are similar to the people we knew growing up. Production-wise, it is a combination of wooden instruments and electric instruments. We try our best to put the song in the proper musical setting.

We’d like to thank you for taking the time to check out “Folks Like Them”. We also think that there really couldn’t be a better combination than country music and food. We will be releasing lots more music this year and look forward to sharing it with our family at Southern Fellow.

There you have it, folks! That is Allen and Chris, the father and son country duo who make Folks Like Them. They are two terrific guys, and I highly encourage you to check out their music. You can do so anywhere you get your music, including Spotify, Apple Music, Amazon, and YouTube. While you are listening, gather your family around the dinner table and give our recipe for Country Shepard’s Pie a try. I believe it will be your family’s next favorite meal. Thank you for listening to all the artists we feature and bringing our recipes into your home. Welcome to the Southern Fellow family!