For the past few months, I have struggled internally about where I stand on the divide between pop and traditional country songs. At the end of the day, all I want is a good story that reflects my life. I have many close artists friends that are more pop than country who know me inside and out. Yet, I’ve only had a handful of interactions with two guys who write songs like they have had a front seat to my entire life. Allen and Chris, the boys that make up Folks Like Them, are the guys I’m talking about. Their single “Wish Heaven Had a Phone” hit the nail on the head when I reflect on my father’s passing.

The first couple of verses to “Wish Heaven Had a Phone” brought tears to my eyes. Many of you reading this most likely have never run a barbwire fence, but it requires hammering a whole lot of fence staples. One of my first memories of my father teaching me something was how to drive those staples in a fence post. The long end goes at the top, angle the staple up slightly, and drive it into the fence post. He would then tell me that a real man could drive a staple with just three taps. It’s funny reflecting on that advice. I gauged manhood on fence staples as a boy, but I realized the wisdom my dad was teaching years later. It was not to waste time, and as a young person, that wisdom sounds ridiculous. Time felt endless then. Now all I want is more of it with my dad.

My dad struggled all his adult life as a quadriplegic. He was injured three months after marrying my mom while working cows. The physical pain he could deal with, but not being able to be hands-on with us kids, took its toll. However, he never let that stop him from giving us valuable life lessons. Some were funny. I remember him telling me never to trust a grown man who wears velcro shoes. Others were more direct. These focused on the truth, hard work, and how to treat women.

Over the past five years, I have missed him more than ever and the reason “Wish Heaven Had a Phone” hit me as it did. I made so many mistakes as a young man. Now things have changed. I have hit my stride, and with that comes so many questions I wish I could ask him. Whether I wanted it or not, he would always give me honest advice. No matter how old I get, the questions keep coming, but not always the answers to those questions. I wish every day I could pick up the phone for just a 10-minute conversation even though I know what he’s going to say.

“Wish Heaven Had a Phone” is going to hit each of you differently. If you are like me, the memories will come flooding back. If your dad’s still here, you might reach for that phone and give your dad a call. Those who didn’t have the best father might think about how you want to change that for your kids. Folk Like Them has something for just about anyone.

I think “Wish Heaven Had a Phone” deserves a spot on your playlist. If you love it, go ahead and add every song from Folks Like Them to it. You are going to love them all. Want to learn more about Allen and Chris? Check out our full interview with them on our Feed the Band series. While you are there, give their Best Country Shepherd’s Pie recipe a try. It will bring the whole family together. Thank you for dropping by The Luncheonette. We have more music and recipes on the way! 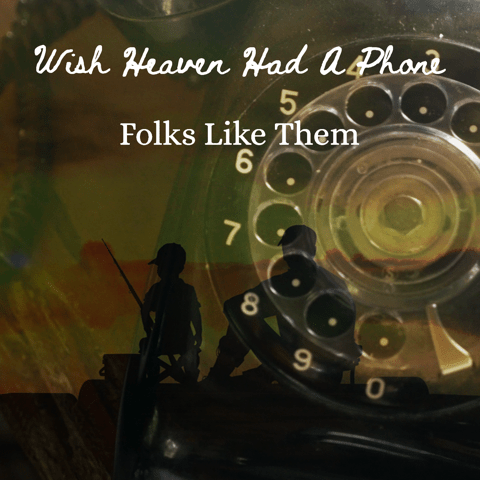