How is family defined? When I first started Southern Fellow, I thought I knew the answer. Family was a small circle of blood relatives, and because of this close connection, you are willing to do anything for them. I thought that my idea was thoroughly thought out at the time, but looking back, it seems naive. If my journey has taught me anything, it’s that family can form anywhere at any time with people who don’t share your DNA. This sentiment grows stronger every day as I meet you. That said, it had never felt as instantaneous as when I first met the country music sister duo, Steel Ivory.

Straight up, I’m going to tell you that Kayleigh and Kristin, the two sisters who make up Steel Ivory, should be on any country music playlist you have. I agree with many of you that music is subjective. However,  I feel confident that if Steel Ivory is not your thing, neither is country music. They may pull from other genres, but their music is built on the same great stories and vocals that have drawn people to country music for decades. Nothing shines a brighter light on that fact than their latest single, “Thank God for That”. Written with Taylor Teasley, this single is the unapologetic breakup song that country music fans will want to sing out loud until their voices give.

I know I’m laying down a ton of praise, but to be honest, Steel Ivory deserves it. However talented Kayleigh and Kristin are, who they are on the inside is what truly captivated me. I feel incredibly fortunate to have developed the family I have in the past three years. Southern Fellow seems singular, yet artists and readers alike have given their time, treasure, and talent to make this family work. When I do interviews about this family, new artists, radio personalities, and media outlets can’t wrap their heads around it. Yet, Kayleigh and Kristin dove into the concept headfirst within seconds. What started as a serious interview turned into what I would relate to siblings catching up and cracking jokes. Proof in point, I misspelled Kristin’s name a couple of times in the written interview, and she thought I did it as a joke, when in fact, it was simply me losing my mind.

You might think it’s just me. After all, I have the power to project niceties to an international audience. However, nothing could be farther from the truth. Steel Ivory is very aware of the role fans play. The only similar comparison I can come up with is Taylor Swift. I have never been a Taylor fan. You can rant in the comments, but I learned to respect one thing, and that’s how she treats her fans. I didn’t realize how much until I met her first manager, Mr. Rick Barker. I may never be a Swifty, but I will always respect the way she treats people. This sentiment also extends to Steel Ivory. Kayleigh and Kristin value connecting to you. They are fully aware that your stories and experiences are paramount to their music. Without them, I don’t think they could sustain making the quality of music that they are right now.

Enough of my opinion on things; let’s get to the interview! I actually had to send them some serious written interview questions. If we just went with the Zoom call, you would have to read a bunch of bad jokes and us laughing at them. Before we get to the interview, please check out the best brownie recipe they inspired and enter our giveaway at the end. Here is our interview with country duo Steel Ivory.

Our dad is a musician, so we were surrounded by music growing up. He was always practicing and taught us to play piano at a young age. He also used to write songs. We got involved in choir and musical theater in school and just fell in love with music as a whole. We had a period of time where we weren’t sure what genre of music we wanted to do because we have a very wide taste in music. We love country, pop, and even punk/alternative music so we’ve written a good mix of different types of songs. Our grandparents always told us we would end up in country but we weren’t convinced. Well turns out they were right! We took our love for the 90s women of country and pop influences and decided to give it a go ourselves. So 4 years ago, we packed up all our stuff in Ohio and made the move to Nashville to chase this crazy dream together!

Kristin, if you could time travel, what advice would you give the Kristin of two years ago?

I would say be kinder to yourself and don’t worry so much about what other people think. It’s okay to be different. Enjoy the journey. It’s okay to make mistakes. That’s how you learn and grow as a person. Something I would tell myself then and I’m still learning is to enjoy every moment big or small, celebrate all the little highs and accomplishments because Kristin, two years ago, would think what I’m doing right now is pretty dang cool.

Kayleigh, when people come to you for help, what do they usually want help with?

Probably music stuff, lol. Or maybe just a listening ear. I’m a very sensitive and compassionate person, so I will always listen if someone needs to talk.

Kristin, if you came with a warning label, what would yours say?

Warning: Always joking & laughs about everything. Also obsessed with her dog.

We are continuously developing recipes here at Southern Fellow; what recipe do you use when writing music?

I wouldn’t say we have a set recipe for writing. We kind of take the steps and mix them up depending on the song. Sometimes we start with a melody, and sometimes it’s more lyrical. But I will say we always know what we are setting out to make. Our “hook” is like the dish we are making, and then we write to that to get to the finished product.

Kayleigh, what are you most insecure about?

I think one thing would be public speaking or the talking part of being on stage. I’ve gotten way better, but I feel like I’m somewhat of an introvert masquerading as an extrovert for my career. But as soon as I start singing all the nerves go away. 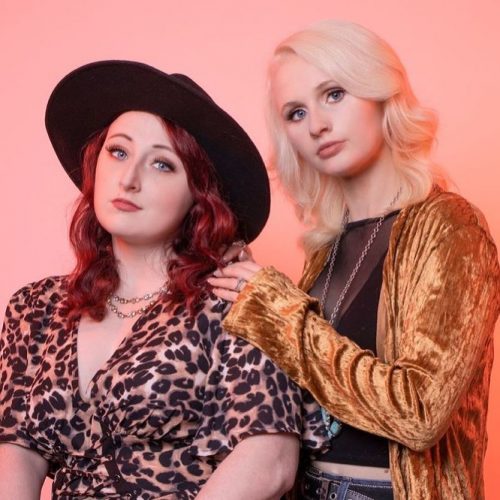 I’m sure you have had one or two meals together. What is your first fond memory of food?

Kayleigh: I would say mine is that when I was very little, my Nana lived with my grandparents, and every time I came over, I would dance and sing for her, and she would give me m&ms.

Kristin: Growing up, we always had family gatherings at our grandparent’s house where everyone would bring a dish and hang out. Our grandpa would make hamburgers and hot dogs on the grill, and our mom would always make her famous cheesy potatoes. Grandma would bake us cakes if it were someone’s birthday, and we would all gather around the table and sing happy birthday (some out of tune, haha). So that’s my first fond memory of food with our family. We still try to have as many gatherings as we can when we go back to Ohio.

Kristin, what are some of your personal “rules” that you never break?

-Always make time for family and friends. The people I love are the most important thing I have in life.

-Make my own mental/physical health a top priority. I can’t work or do anything if my cup is empty.

-Oh, and never eat an Oreo whole. I have to split it and eat the icing first. Haha

Tell us about your latest single, “Thank God for That”.

We wrote “Thank God For That” over zoom with our friend, Taylor Teasley. It was actually our first write together, and I (Kayleigh) had an idea about someone telling you you’d never find someone else like them, and I just thought, what would you say in return? And the words “Thank God For that” came out of my mouth, and we decided to roll with it. We love it because we feel like it’s a different idea than anything we’ve ever written before – being grateful that it didn’t work out in a relationship. Sometimes what feels like the end of the world is a blessing in disguise.

Kayleigh, if the world froze for an afternoon and only you could move, and no one could see you or remember what you did, what would you do?

Sneak into the grand Ole opry and sing on the stage! Lol

Steel Ivory are sweet, but I think this brownie recipe has them beat. This recipe is simple, but the results are amazing! We love adding a crunch with some chopped pecans. Try this recipe today!
Let's Cook

What do the next two years look like for Steel Ivory?

Kristin, what’s the hardest mistake you had to learn from, and what knowledge did you gain from it?

The hardest mistake I’ve learned from is overly comparing myself to others and caring too much about what other people thought of me. I ended up feeling like I lost myself for a long time trying to change for people. As cliche as it sounds, I’ve learned that the people who are meant for you will love you for you, so just be yourself and love who you are.

What’s the most challenging part about being a sister duo?

The most challenging part is that we have to plan out everything we sing and rehearse a lot. Every artist has to practice but it adds an extra element when you have two people who harmonize. We both have to be on our game, or it doesn’t work.

What female artists would you like to join the team if you were to form a girl group?

We love ya’ll!!!! Your love & support for our music means the absolute world to us!

That is Steel Ivory! It’s with great pleasure that I get to welcome Kayleigh and Kristin officially to the Southern Fellow family. Let us know in the comments if you would like us to do a live interview so you all can be part of our shenanigans. They are so sweet we paired them up with the only brownie recipe you will ever need. So while those brownies are in the oven, go ahead and add every song from Steel Ivory to your playlist. You can find them everywhere you stream your music, including Spotify, Apple Music, Amazon, and YouTube. Also, be sure to enter that giveaway at the bottom. Thank you for checking out this interview on Feed the Band. We have more music and recipes on the way!

How pretty is this?!? - The Christmas ornaments a